This page gives an overview of the frequency that users are on the app and the version of the app that the users are on. 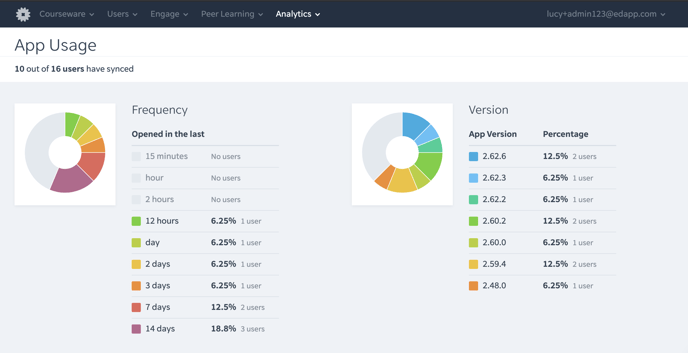 The frequency of app usage helps Admins to understand how often users are on the app and completing their learning program. Admins can identify whether users have formed their habit of learning and whether there needs to be more done to encourage this habit. This could be increasing the daily star reward or making shorter lessons to make use of micro-moments. It also allows Admins to see an overview of the frequency to facilitate a quick reporting update.

The version of the app that users are on is also a key element to highlight, as users with an older version of the app won’t be able to access newly released features or improvements to the platform. It is crucial that learners are updating their apps when a new version is released in order to keep on track with their learning program. If a large percentage of users are on an old version of the app, then it is very likely that many of these users haven't logged in for a long time. This would mean it is time to re-engage these users to complete their courseware.